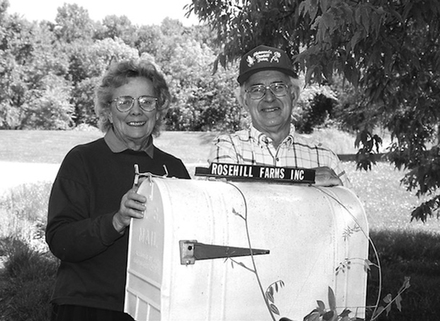 “Fifteen years ago began my personal association with what Hollace and Ila Sherwood called 'the corn project.'  I had known the Sherwoods as teachers in the Mitchell Community Schools in the 1970’s.  Hollace had volunteered to be the required teacher-sponsor when we organized the Bible Club as an activity at the high school.  He was teaching chemistry there at the time.  I was pastor at Tulip Street Church during the 70’s.  He was a teacher that his students highly respected and admired.

"My wife Donna and I returned to Mitchell and Tulip Street Church from ministry in California in 1987.  Hollace and Ila had both retired from public school teaching.  He came to my home shortly following our return here to explain their interest in feeding hungry Third World children, and the value of high-lysine corn.  He and Ila showed me the Saturday Evening Post article that inspired their involvement in 1985.  It is from that storybook beginning that what is now called Bryantsville Hunger Relief Project has grown.  They personally borrowed money to purchase corn that we hoped we could send to the needy.  The money was borrowed in faith and trust that God would motivate others to stand beside them financially.  I have no idea what this ministry cost Hollace and Ila in those early years.  I do know they received some support; whether it was adequate to meet the borrowed amount, I do not know.  They just knew God had called this ministry into being and God would provide for its needs… and He has.”
(Excerpt from article by Max Timbrook, former board member)

The bagging and storage facilities and machinery today are basically the same as in those early years.  Whatever equipment money has been invested has been via the Sherwoods and Rosehill Farm.  All donations have been applied directly to the purchase of corn, and minor office and mailing expenses.

Over the years more than thousands bags of corn have been furnished to the needy of our world, in the name of Jesus. All of this came from a single idea and a heart-felt vision that Hollace and Ila Sherwood had after reading a magazine article on high-lysine corn. The project was embraced by their family, their home church of Bryantsville Church of Christ, and other area churches and organizations, and has been supported by hundreds of volunteer workers and financial donors. Praise the Lord, and thanks to one and all!

With the 1999 passing of Ila Sherwood and the loss of Edward Sherwood (Hollace's brother)in 2000, along with the speech difficulties experienced by Hollace following a stroke, the Sherwood heirs recognized a need for some change. While the heirs pledge their support, they also have family and job obligations and none of them presently reside in the immediate vicinity of the farm from where the Corn Project operates. The challenges facing them made it logical to seek a more structured organization with local individuals serving in a more clearly defined way in the day-to-day operations.

On November 25, 2000, a meeting was held at the request of the Sherwood family with people who had remained interested and involved in the Corn Project. At that time a commitment was made to form a 501(c)3 nonprofit organization under the name of "Bryantsville Hunger Relief Project, Inc." and a five-member board of directors was elected.  The list of directors and a variety of other important information is included elsewhere in this web site.

We desire your continued support and urge you to encourage other individuals, your church or other organization to become involved.

Article III of the Articles of Incorporation for the Bryantsville Hunger Relief Project, filed with the Secretary of State of Indiana, states our purpose for being as follows:
"In carrying out the Christian faith, to provide food, primarily in the form of high-lysine corn, to people in need."
So the government knows our intent and most assuredly, God knows. And He has called and is still calling His people to this mission. He will honor our efforts as we honor Him with our best.

You may also visit our Facebook page at:  https://www.facebook.com/BHRPcorn